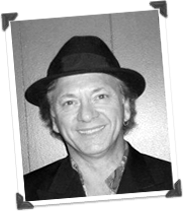 Jimmy’s show business beginnings came by playing variety shows at the early age of 5, and he hasn’t been off the stage since. He starred in several musicals in local theatre groups, fronted his own band playing some of the smarter night and supper clubs and private affairs in the New York area, and recorded several jingles for both local and nationally advertised companies such as TSS and Johnson & Johnson.

Perhaps best known as the lead singer of Randy & the Rainbows for many years, he has shared the stage with such acts as Little Anthony and the Imperials, BJ Thomas, Jerry Lee Lewis, Blood Sweat and Tears, and a host of others. His vocal abilities, which blend perfectly with that of the Planotones, and his entertaining stage presence, make him a true asset to the group.