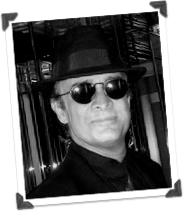 He has been featured on camera in several major motion pictures, including Jesus Christ Superstar and Hair, as well as many network television shows and specials. Frenchy’s fans know him from his work with The Inquisitors, and he is honored to have joined the elite ranks of Kenny Vance and The Planotones.